How Often Are You Wrong?

Many people have said kids should learn how to program. They usually bring up how this helps them think logically. They don't point out that it also helps them fail over and over and over. The failure is unambiguous, and you can't argue with it. Your program doesn't compile. And that's clearly because you were wrong about something. No matter how sure you were that you were right, you were wrong. Day after day after day.

But the thing is, the goals are usually simple and achievable, so you get it right in the end. So it's not soul-crushing failure.

And when I fail, it's not like, "Ho-hum. I failed again. Whatever." Often, my whole world turns upside-down, at least briefly. "I KNOW I did that right! There MUST be something wrong with the compiler!" But, no, I'm wrong again, today. Just like I was yesterday. Just like I will be tomorrow, even though I will think I'm right. --grumblebee, on MetaFilter

One of the reasons I haven't been posting much lately is that I finally started to realize how futile it is to try to convince non-skeptical people they are wrong.

The above quote resonates with me because I am a computer programmer, although my skepticism predates my ability to write code. I've been skeptical as long as I can remember. Maybe it's innate or maybe I picked it up early on.

Either way, I forget that most people aren't skeptical when I'm arguing and it can be frustrating. My opponent will make an argument that's so bad the conclusion isn't even relevant to the argument. The conclusion might be right or it might be wrong, but the argument is so bad it doesn't matter. I think he must be arguing in bad faith and I get angry.

But the truth is most people don't take seriously the possibility that they are wrong, so they don't bother to examine the arguments they make. Whenever I write a post or even just a comment, I pause before submitting it to look at it from my opponent's point of view. Sometimes I see immediately that it's a weak argument that wouldn't have convinced me if I didn't already agree with the conclusion and I don't post it. Most people don't seem to do that.

It's obvious if you think about it that there is a substantial possibility we're wrong any time we disagree with anybody. Even if you're very smart, there are almost always very smart people on the other side of the debate, whatever it is. Popular subjects of debate like religion and politics usually have books and books written by people smarter than all of us arguing all sides.

And yet most people assume they're right most of the time even when there are millions of reasons they should be skeptical. For example, everybody agrees that the overwhelming majority of people born into exclusive religions must be seriously wrong about their religious beliefs, since in general only one (at the most!) of the religions can be true. And yet how many Orthodox Jews have given serious thought to the idea that if they were raised Muslim, they would believe in Islam with the same strength that they currently believe in Orthodox Judaism? That their beliefs are more likely due to an accident of birth than they are true?

They wouldn't be stupider or less educated or less honest, but they would believe something completely incompatible with what they now believe. So, knowing that, how can they have so much confidence in their beliefs? It's crazy!

If you care about being right, then it means you have to think differently than most people. So what do you do to minimize the odds of being wrong?

Many people turn to reason, because when you reason well you feel like you are moving productively towards the truth. And yet it's easy to see that reason alone is insufficient because very smart people on all sides of almost all debates are able to reason in a way that is utterly convincing to themselves and to their allies. Search the web and you'll find very long, reasoned arguments for a 6,000 year-old universe, for 9/11 being an inside job, and for every religion under the sun.

Computer programming is one of a few disciplines that force you to test your reasoning against reality constantly. And even in that field, many, many mistakes sneak through because not every line of code can be tested against every possible configuration of variables. It's actually amazingly hard to write code that can stand up against even casual use without turning up bugs. Just imagine how many bugs must be in your reasoning that is never tested even a little bit against reality!

This is why I'll trust a scientist over a theologian any day. Both scientists and theologians make errors in their reasoning, but scientists run experiments. No experiment is perfect, just as no amount of testing can find all the bugs in a significant computer program, but the theologian is like a computer programmer who just writes his code on the blackboard and never even tries to run it. Or worse -- he's like a programmer who writes code on the blackboard that references other code written by older programmers going back generations and generations for thousands of years even though no compiler even exists for the language they're using. There's just no chance that program could be even close to accurate.

Even worse, we know for a fact that theologians in the past were wrong about the issues they touched on that turned out to be testable. Before science, theologians made all sorts of claims about the material world that turned out to be false. The rabbis of the Talmud made all sorts of ridiculous claims about spontaneous generation of maggots in meat. (The proto-scientists of the day made some of the same mistakes, of course, but compare the way today's scientists treat those proto-scientists' ideas to the way today's Orthodox rabbis treat those rabbis' ideas.) Even undisputed geniuses like Plato and Aristotle who relied on reason rather than experimentation made some whoppers about reality. If even Aristotle can be laughably wrong, how stupid for us to think we can reason in a vacuum!

Always remember that you are wrong about a lot of things. In matters like religion that lie far outside of the world of experimentation and empiricism, you're almost certainly wrong about pretty much everything. Not a little wrong, but a LOT wrong. Like Aristotle and his five elements wrong.

In more mundane matters, at least spend some time trying to prove yourself wrong. Never argue one side of an issue only. Read every argument you write before you submit it and try to think about what a smart opponent would make of it. Think of what YOU would make of it, if you happened to have been born in a different country or to a different family or religion. Be especially skeptical of beliefs that are convenient, beliefs that support your lifestyle or your people or your country or your side of anything.

For practice, find a popular argument that is irrelevant to you. For example, some land dispute in a country far away between people who don't share your ethnicity or your religion. Note how fervently each side is sure they are right and the other side is not just wrong, but OBVIOUSLY wrong. Then go back to an argument that is very much relevant to you and try to look at it from the other side, and ask yourself how you can really, really know that you're the one who's not in denial.

The truth of the matter is, unless you're very unusually skeptical and very unusually open to empirical reality, you're almost certainly one of the people in deep denial.

What differentiates you from the great mass of deluded wishful thinkers? What steps are you taking to make sure you aren't deceiving yourself?
Posted by Jewish Atheist at 12:46 PM 40 comments

Biblical Conception of the Universe 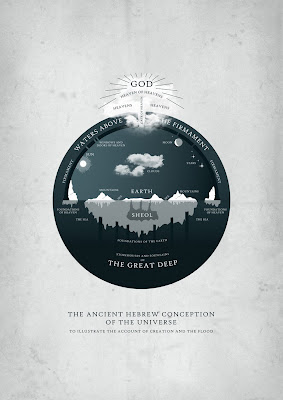 This is pretty cool. I remember it blew my mind in high school when I started thinking about how the Torah describes rain as coming from above the firmament, where the stars are.