The Bind of Orthodoxy: Tolerance and Toevah*

That this event took place is a step in the right direction, of course. Some elements within modern Orthodoxy are pushing hard to spread a message of tolerance and sensitivity. I commend them for that. But they've already stretched the limits of Orthodoxy to the breaking point. They can go no further, and it's not clear that they can sustain the expansion of tolerance that they have achieved.

This is a letter signed by 5-7 (versions vary) roshei yeshiva**:

The Torah requires that we relate with sensitivity to a discreet individual who feels that he/she has a homosexual orientation, but abstains from any and all homosexual activity. Such sensitivity, however, cannot be allowed to erode the Torah’s unequivocal condemnation of homosexual activity. The Torah’s mitzvos and judgments are eternally true and binding. Homosexual activity constitutes an abomination. As such, publicizing or seeking legitimization even for the homosexual orientation one feels runs contrary to Torah. In any forum or on any occasion when appropriate sympathy for such discreet individuals is being discussed, these basic truths regarding homosexual feelings and activity must be emphatically re-affirmed.

And this is a message from the president and principal of RIETS, the rabbinical seminary of YU:

In light of recent events, we want to reiterate the absolute prohibition of homosexual relationships according to Jewish law. Of course, as was indicated in a message issued by our Roshei Yeshiva, those struggling with this issue require due sensitivity, although such sensitivity cannot be allowed to erode the Torah's unequivocal condemnation of such activity. Sadly, as we have discovered, public gatherings addressing these issues, even when well-intentioned, could send the wrong message and obscure the Torah's requirements of halakhic behavior and due modesty. Yeshiva has an obligation to ensure that its activities and events promote the primacy and sacredness of Torah in our lives and communities. We are committed to providing halakhic guidance and sensitivity with respect to all challenges confronted by individuals within our broader community, including homosexual inclinations, in a discreet, dignified and appropriate fashion.

We must be sensitive, but homosexuality is an abomination. We regret that Orthodox Judaism's rules and stigmas against homosexuality cause untold suffering and sometimes suicide, but we must be terribly careful not to send the message (chas v'shalom!) that homosexual behavior is okay. It's *more* important to avoid sending that message than it is to promote understanding and sensitivity.

The Torah says that (male) homosexuality is an abomination, and that those who engage in homosexual behavior deserve to be killed. Orthodox Judaism says that the Torah is true and is the foundation for all that is good. This cannot ultimately be reconciled with what every decent person living in a modern society in the 21st century knows to be true: that love is love.

People wrote the Torah. That this is controversial to anybody at this point is frankly insane. There's no magical sky god that dictated this scroll to a great man named Moses at the top of a mountain for 40 days and 40 nights thousands of years ago. Are you all children? This is a story for children, or perhaps primitive illiterates like the ones who were the original audience for this story.

That was then and this is now, and you need to step up and start being honest with yourselves and each other. You can't be tolerant or sensitive as long as you believe that the Creator of the Universe thinks that homosexuality is an abomination and you willingly worship him. 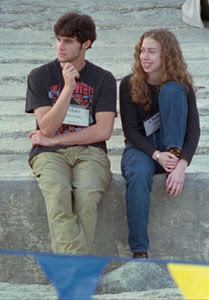 Cross-Currents, representing the warmth and love of right-wing religious people everywhere, wishes No Hearty Mazal Tov For Chelsea. Why? She's marrying a Jew. And she's not one.

That reminded me of a dream I had when I was first going OTD. I was, in this dream, engaged to Chelsea Clinton! And my parents were fuming that I wanted to marry a non-Jew.

It's not that I was ever particularly interested in Chelsea Clinton, romantically. I think the role she played in my dream was like the role Sidney Portier played in Guess Who's Coming To Dinner: a perfect catch who had no flaws a parent could complain about, forcing the parent to oppose the marriage on explicitly racial (religious) grounds or not at all.

(Previously: Intermarriage and Interdating, Part I and II.)
Posted by Jewish Atheist at 10:25 AM 62 comments